Preplanning Your Funeral in Your 60’s 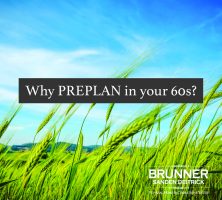 According to a National Funeral Directors Association survey, more than half (62.5%) of us expect to participate in making our own funeral arrangements. And yet, less than a quarter of us have actually acted on that impulse. Not really so surprising since making funeral arrangements can literally be the very last thing we do. We can put it off right up to the end!

So, when do you think you should just go ahead and get it done? How about when you are critically ill? Or, maybe before you go on that cruise? Does when you go into the nursing home seem too late? How about as you are preparing for retirement?  Actually, sooner is better than later for several reasons.

First, there is no down side to having your arrangements in place. If something new comes along or you change your mind about what you want you can always make changes to your plan. If you move you just move your plan. Nothing is carved in stone.

Second, there are some real up-sides to getting your funeral plan written and on file at the funeral home. For one thing, you just never know.  People do die unexpectedly. And then there is the money. Historically funerals, like almost everything, have gone up in price over the years. The funeral of today will likely almost double in cost in 10 years. Why are you waiting?

Prearranged funerals are often funded in a way that buffers or even eliminates the impact of rising prices. You buy at today’s prices and you are done. When you plan in advance you also have the benefit of being able to pay over a specified period of time (you choose). As you age your choices become more limited. When you make your arrangements while you are in reasonably good health, the cost of your funeral can be paid in full should you die before you’ve completed your payment cycle. Again, sooner is better than later.

The early 60’s is a good time to visit your neighborhood funeral home and get your plan written and on file. This is when you will get the most out of the funding options.  It is also when you are likely to have a good idea of what you will want in the way of services. At this age you are grounded and you are likely to still be earning income. Making payments for a bit will hardly be noticed. Then when you retire, and take that cruise, you can just enjoy. You’re all set to just enjoy the rest of what life has to offer.